It's been a long time, my loves. I haven't died. I promise. Life has been a little hectic of late. I will do my best to catch you up.

The weekend of July 9th, Master and I went to our first play party. It was such an amazing night. Please forgive me, Master likes to get me drunk and I'm not sure how good my recollection is going to be. I spotted this event on Fetlife a few months back. I could barely contain my excitement.

"Capes and Corsets: Halloween in July" 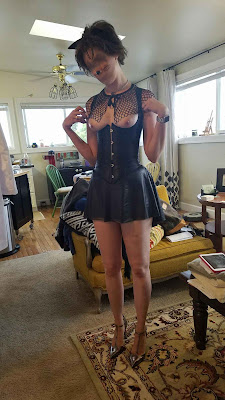 Not just a play party, a costume play party. Aaand, I have a thing for corsets. What is Catlytt Black going to be for halloween? A black cat... of course. C'mon guys. I have several corsets in my collection, but I wanted something... naughtier. So, I did a little shopping. A black satin underbust corset and a very very very short skirt. I had the tail and ears ready to go already.

I was so nervous. So so nervous. The party was located in a haunted house venue. I recently had a conversation with a friend who insisted that sexy people cannot be shy. I would have to vehemently disagree. I'm certainly becoming more outgoing as I get older, but I still have some social anxiety when I'm out in groups of people I don't know... with my tits out.

I came to the party wearing a grey satin trench coat over my costume. Even where I live, me outfit would have drawn unwanted attention.

There is one thing that I am finding to be true pretty much across the board with openly kinky people. They are kind and accepting. It really makes it so much easier to put yourself out there. They love new people and will come up to introduce themselves.

So, with social anxiety in full swing, we walked in. The place was huge... We walked through a little bit of the place. The setup was really neat. All the play spaces were demarcated with fluorescent marks. And the whole party was lit by blacklight.

The next big hurdle was the coat check. I mean... my tits were going to be out in... public. You all are probably laughing at me because I have no trouble posting things online, but there is something a little different about looking people in the eye while they stare at your tits.

"You don't need that anymore," he said gently but firmly. There were no ifs ands or buts about it. So, I took off my coat. Much to my relief no one batted an eye. This was normal. Oh good, this is normal. Luckily, coat check came with a gin and tonic (which totally glows under blacklight!!). But, it wasn't until about halfway into my second that I suddenly realized that I was damn sexy and had no reason at all to not feel every bit a goddess.

I guess I will give you the events in vignette form... because I don't really remember much of the in between.
For pain to be pleasurable in a sexual situation... there is a period of "warm up." It's going to hurt someone a whole lot more if the first spank is as hard as you can, than if you warm up with a few slaps first. The brain produces chemicals in response to pleasurable and painful circumstances. In my college psychology course, the professor explained to us that the brain chemicals that deal with the survival instinct are really all the same. He called them the 4 Fs. Fight, flight, feed, and... mate. The difference is in how you interpret them. Jumping straight into pain is like going zero to sixty in 2 seconds and the brain doesn't have time to catch up.

We made quite a few new friends at the party. We met a three self-proclaimed nudists (a couple and a single) who we both thought were completely darling. We also met a Dom/rigger who is now a dear friend of mine.

In a small room off of the food area, there was a rope/rigging demonstration going on all night. We kept returning to the area to get more drinks (for me mostly) and looked in periodically to see what was going on. I was vaguely aware of Master talking with the rigger... I was too busy being fascinated to be social. I did not find out what they had discussed until later.

And then he let Master have the reigns, something to do with a hitachi. I've never used a hitachi before... it's just... wow. So much power. Master flicked the riding crop a few times on my clit. I let out a howl. That's when the crowd started to form, at least I am told. He handed Master a slapper... which Master applied directly to my clit. With every falling stroke, I let out a screech. The people holding my arms and legs had to earn their keep because I'm sure I began to struggle.

At some point, the person holding my right hand became someone else. He was wearing a solid black body suit that covered his face. I only remember that he held my hand tightly. At some point during my torture, I remember turning to him and whispering a quick "Thank you, shadow," before my attention was quickly drawn back by sharp and stinging pain.

I have no idea how many times I came, as many times as Master commanded me. When Master was finished with me, we discovered that he had vibrated my clit piercing right out with the hitachi. He searched inside me for a minute before he found it in a fold in the table. I don't know how he did it... but he put that piercing right back in. There was applause. I didn't really appreciate how badass this was until later when I tried to put it back in myself. Those little threads are tiny, and he did it in the dark.

It really was a fantastic party. Master and I were a huge hit (probably the best looking/dressed couple there.) In one of the back rooms of the party there was a Sybian and a fucking machine. We got back there just as these things were being packed up... next time. While watching the fucking machine, I was approached by the first of the girls that I had eaten. She asked Master if she could return the favor. He agreed and she sank to her knees in front of me. She smiled, looking up at me, when she saw my piercing. Her tongue slid over my clit and I let out a moan. I tilted my hips forward to ease her access. She swirled her tongue around. She felt delicious. Finished, she stood before me. I thanked her, but I didn't catch her name. I'm still kicking myself over it.


We said our goodbyes, and Master walked me out, holding me tight against him. You can bet your ass that we fucked when we got home.
Posted by Catlytt Black at 12:54 PM

Catlytt Black
Hello all! I am Catlytt Black. I am a 32 year old slave, serving the most glorious and deserving Daddy. It's been a long journey to get here, several relationships failed and lots of collateral damage. Now is my time to heal. I am chronicling my submission per Daddy's request.